Today I had a quick, but lovely, lunch outside by the water here in the Bay of Kotor. With the exception of “spaghetti bolognese” and a couple of other items, the Montenegrin menu was difficult to decipher. Yes, I know. I should be farther ahead than I am today. The kind and attentive server, aware of the selection challenge I was having, brought me the English menu. I ordered a dish which I knew had chicken in it, but I was not sure what else was coming. It ended up being a delicious spicy pasta dish with chicken and vegitables. Perfectly wonderful. I am just glad that I did not select from the Appetyre section of the menu… chewy and bitter come to mind! 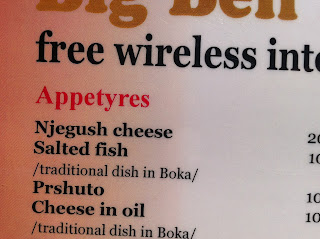 I thought you might enjoy a couple of the other menu items I came across recently. How about Roast or Boiled Kid? 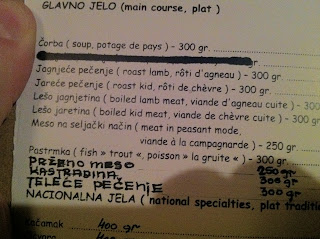 Ever been puzzled about what do to on your next holiday? 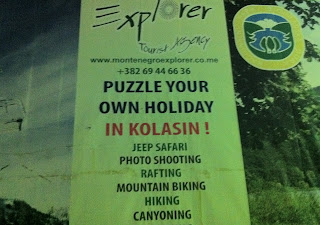 Each day in this amazing life experience I am reminded of how quickly this little nation on the Balkan peninsula has been launched into 21st century Europe and the Anglo-Saxon dominated world. I greatly respect how they are catching up so quickly. Little signs like these are great, and slightly comic, reminders of the great diversity of the world we live in and how important it is to respect that diversity.

A year in Montenegro

Lady of the Rocks

It is hard to believe that it has been a year now that we have lived in Montenegro. My initial culture shock has been transformed into a new way of life. The last few months have been filled with bright sunshine, hot sun, glistening waters full of people and boats of all shapes and sizes. The coastline of this mountainous country completely transforms itself in the summer season making it even more stunning that I can describe.

The extremes of those early days from September of last year are now less sharp then they were in those first few months. We have moved from ancient Kotor to our modern apartment in Porto Montenegro and grown accustomed to the differences between this seaside living and our previous seaside home of Vancouver.

Traffic still baffles me. They love to pass each other here at high speed, even in the most precarious of driving situations. A year in Montenegro has made me a very defensive driver. Of course, it has also made me appreciate so many more things from the kind people, to their simple foods and proud personalities.

Pieter has had to leave his Kotor cats behind him since we moved into the residences at Teuta. Somehow in Tivat there seem to be less stray animals around. Dogs asleep in the middle of busy intersections are still common though. Nobody seems to mind.

We are about to embark on our second year of this life changing experience. It should be an interesting ride. We have much more to do in the next 12 months!

Home sweet Home in Montenegro and one step closer to Europe

Our furniture, art, electronics and other random personal belongings that make up your life, arrived on a crisp Tuesday evening after sitting in the local customs house for almost a week. The experience of finally getting everything from the customs depot into the house was quite traumatic (the 20 foot container arrived, but the forwarding agent forgot to send anyone to unload it).

By now, I guess I should have anticipated the experience to be more complicated than I would have expected it to have been. Remember, this is the same place where I recently saw carbon copy paper being used for the first time in 25 years; rubber stamps are not just a metaphor and it takes 3 weeks to get an internet connection (and only after you fight for it). It makes that 15 minutes of being on hold with Telus seem like a dream.

In the end, Pieter recruited 3 local guys who were watching our adventure unfold in this small quiet fisherman’s village; the guys helped re-arrange parked cars and trucks so the driver could turn his trailer around and park in front of the house. In the end, 6 strong locals helped us unload everything into the 4 floors of our new waterfront home.

The lesson: simple and convenient are not part of the social fabric yet. You always have to remember that this country is just a 3 year old and it’s mother was a staunch Communist. It’s father? Well, after being occupied by everyone from the Turkish to the Italians… who knows who dad is?

Changes are making this young country grow up quickly. Today was historic as the travel restrictions that have been imposed on Serbs, Macedonians and Montenegrins for the past 17 years were lifted. Finally they can enjoy free movement throughout Europe without having to apply for a visa. Something makes me think that this will be an enlightening time for the people of this newly independent land.

After the difficult move in, life is closer to normal again. Now it is time to take a few days off of work, rest my mind, and continue exploring the region.

Yesterday was a bright sunny crisp winter day. The dark mountains that surround the Bay of Kotor were powdered with white snow. Yet, it was mild enough at sea level that you could sit outside for coffee or lunch. Today the Southern winds are back again and what feels like gale force winds are battering the stone walls of the house. All the shutters are closed so they don’t batter around, and it feels like the middle of the night even though it is only the middle of the afternoon. I am just waiting for the power to go out as it so often does when there is a storm.

On days like this it feels like we moved to Alaska and not the middle of the Mediterranean. It it hard to believe that, in just a few months, the temperature will be back in the high 20s and low 30s (80s and 90s Fahrenheit).

But then again, as I have said before, this is an experience of extremes and contrast.